From The Irish Examiner.

One of Co Cork’s premier sandy beaches is in danger of being blown away unless works are carried out soon. 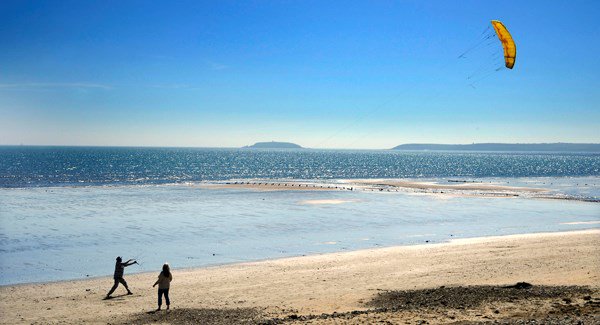 Sand is being blown off Youghal’s Front Strand and fears have been raised that unless there is investment to restore the beach’s groynes — sturdy timber barriers built out into the sea to check erosion — it will have a serious, negative impact on the town’s tourism.

Cllr Mary Linehan-Foley said that every few weeks sand was being blown away from the beach, some of it ending up in the town centre.

She said she had been recently approached by a number of people who were extremely concerned that the beach will disappear if something isn’t done to rectify it.

She added that the beach has dropped in some places so noticeably that steps down to it near the lighthouse now don’t reach sand level.

Cllr Linehan-Foley told a meeting of the East Cork municipal district council that the issue was so serious she wants the council’s Coastal Management Unit to immediately address it.

Dave Clarke, the council’s senior engineer in the region, said the groynes were “largely gone or completely gone”.

Council officials said that 20 years ago a proposal had been made to put five new rock groynes along the beach, which never happened.

“It’s coastal erosion/coastal protection matter. It’s something for them to look at,” Mr Clarke said, and he acknowledged sand levels had fallen in places.

Municipal district officer Joe McCarthy said the coastal unit should also be asked to review a report that was undertaken on the beach by Malachy Walsh and Partners in 2008.

“We need experts to look at this as soon as possible. In Holland they use boulders.

“I know it’s going to cost massive money to fix, but we can’t afford to lose our beach,” Cllr Linehan-Foley said.

Cllr Susan McCarthy, who is chairwoman of the municipal district, said that the council should develop a ‘beach plan’ for all of Youghal’s three beaches – at Front Strand, Claycastle and Redbarn.

She said she had also got a call from somebody concerned about sand blowing away.

She said that a UCC hydrology report done a number of years ago in the harbour for the marina should also be revisited.

Cllr McCarthy said an overall plan should be developed for enhancing beaches and their facilities.

Meanwhile, officials said they would be extending the town’s beachside eco boardwalk and putting in new public toilets.

They said the new toilets were almost complete at Redbarn and a new public convenience was being built at Front Strand. A lifeguard station will be built overhead.

They are also looking at upgrading the lifeguard station at Claycastle and confirmed that the public conveniences will be operational at Front Strand for the summer season.